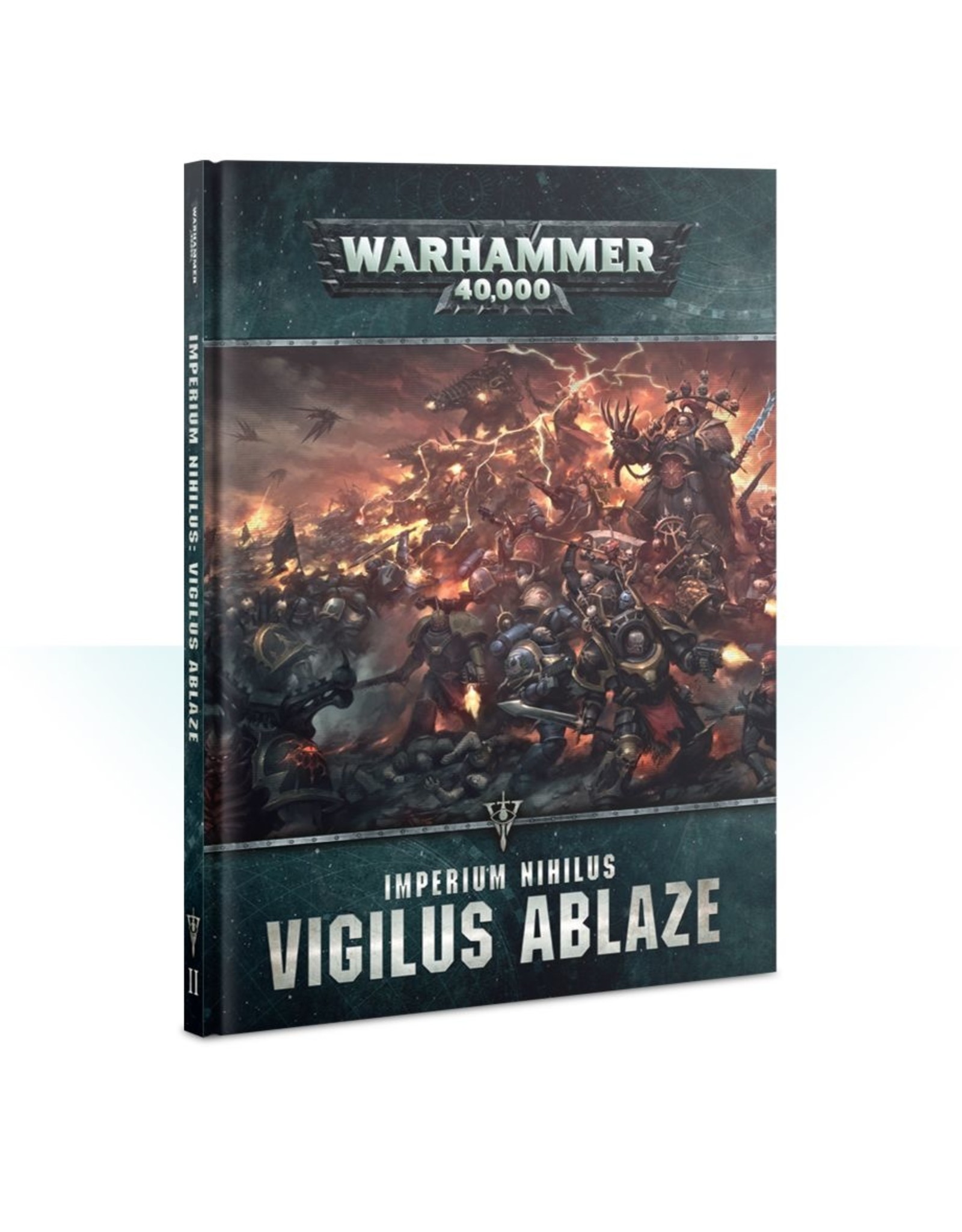 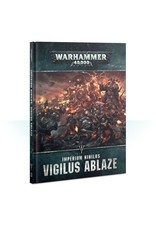 War continues to ravage the sentinel world of Vigilus, yet the fighting is about to escalate to a whole new level. The dreaded Warmaster himself, Abaddon the Despoiler, has arrived at the head of a vast Chaos fleet. Even the tactical genius of Marneus Calgar will be tested to its limits if he is to ensure the planet’s survival, for the Black Legion have consigned worlds beyond counting to slavery and death.

Imperium Nihilus: Vigilus Ablaze is packed with exciting background and new rules that enable you to refight the exciting events described in the book. Here’s what you will find inside:

- Background of the War of Nightmares – the thrilling final stage of the war on Vigilus – leading up to its epic climax of as one of the Imperium’s greatest champions faces its most terrible foe in personal combat
- Detailed accounts of the major events and battles that took place across Vigilus as the Warmaster’s forces sought to bring the world to its knees, including campaign deployment maps and details of key environmental features
- Details of the various armies that fought in this campaign, including descriptions of key actions, illustrations of major figures, regimental breakdown of battlegroups, heraldries, and deployment maps
- Campaign rules allowing you to bring the narrative of this book to life on your tabletop
- Guidance on organising and running a Vigilus campaign, including an extra layer of rules specific to the narrative: a Nihilus Events table and 12 narrative play missions (6 Crucible of War, 6 Echoes of War), as well as additional special rules and Stratagems based on the events of the War of Nightmares
- Six exciting battlezones to use in your games of Warhammer 40,000, each offering new tactical challenges and rules to represent varied battlefield environments, including rules for fighting battles aboard spaceships, amid raging infernos and more besides
- New and updated datasheets for 12 Daemon and Chaos Space Marine units (including Abaddon the Despoiler, as well as the Noctilith Crown and Skull Altar scenery pieces), 6 Prayers to the Dark Gods for use by models with the Priest keyword (and an additional Prayer for each of the four Chaos Powers), army abilities common to many of the Chaos units, as well as weapon profiles and points values
- Eight Specialist Detachments, each including Warlord Traits, Relics, and Stratagems unique to each Detachment
- Rules for the Black Legion, including eight bespoke Stratagems as well as six Relics, Warlord Traits, and Tactical Objectives unique to Abaddon’s traitor Legion
- Rules for Renegade Space Marine Chapters that have thrown in their lot with the Warmaster, including eight bespoke Stratagems as well as six Relics, Warlord Traits, and Tactical Objectives