For decades the Empire has governed the galaxy. From bustling Coruscant to the deserts of Tatooine, stormtroopers mercilessly enforce the letter of harsh Imperial laws and oppress the weak. The Jedi Order was abolished when Chancellor Palapatine became Emperor, and the Jedi themselves are dead. As a Force-sensitive living under Imperial rule, you are also an outcast, whether you were once affiliated with the Jedi Order or have grown up completely unaware of its existence. You must either keep your power secret from Imperial discovery at risk of imprisonment, torture, and death, or else perpetually fight for survival.

Force and Destiny is one of three standalone, but fully cross-compatible roleplaying systems. Each introduces a unique dimension of the Star Wars play experience, but the core mechanics are fully interchangeable. Players and GMs will have the option to use these materials separately or combine them as they see fit in order to carve out a unique, custom roleplaying experience. Together, Edge of the Empire, Age of Rebellion, and Force and Destiny open up the vast expanses of the entire Star Wars universe for your exploration.

Your destiny lies ahead. May the Force be with you. 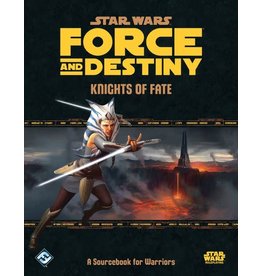 Sourcebook for the Force and Destiny roleplaying game, focused on the Warrior career.
Add to cart
Star Wars FaD: Knights of Fate
$29.95 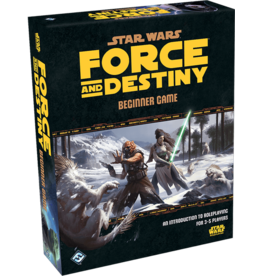 The perfect entry into the Star Wars: Force and Destiny roleplaying experience for players of all skill levels.
Add to cart
Star Wars FaD: Beginner Box
$29.95