What is free can never be caged. What is caged will never know freedom.

Revolution, democracy, freedom — Théah’s eastern nations know these words well. As each nation struggles to find its footing in these treacherous new landscapes, unrest looms on the horizon.

• Eisen, including information about the Eisenfursten, the Horrors within the nation, various locations around the nation, and an expansion on Hexenwerk
• The Sarmatian Commonwealth, with an inside look at the new nobility and those who oppose it, information on the two halves of the country, and an in depth look at Sanderis
• Ussura, including a view of the two contenders for the throne, the Ussura countryside, and a look at Tură, a Leshiye as powerful as Matushka
• Vodacce, including the ongoings of the various cities in Vodacce, important people around the nation, and a look at what happens when Sorte is used untrained

Adventure, political intrigue and upheaval lurk around every corner. Are you ready to take up the cause?

Add your review
0 stars based on 0 reviews
Action/Adventure / 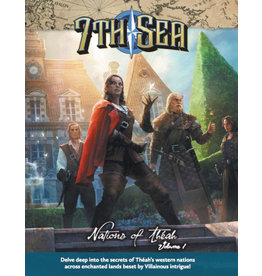